While homeowners living immediately adjacent to the planned trailway section voiced understandable concerns about crime and unauthorized access to their properties, they seemed mostly reassured by both government and non-government speakers, who described other communities’ experience with the Westchester Trailway system.

Homeowner objections are the last major obstacle to building the 2-mile section of the South County Trailway through Yonkers. When this section is completed, along with the proposed Route 9A bypass near Elmsford, cyclists and other users of the Trailway will be able to journey the entire 46 miles from the New York City line to the Putnam County line, on this paved, off-road route. The “vertical” park created by the Trailway has become one of the major amentities and attractions for tourists and homebuyers alike in communities where it has been completed. The completed north-south oriented Trailway will become the backbone for a system of east-west and north-south trailways that will make cycle commuting and family-oriented cycling, roller-blading and walking accessible to large numbers of residents for the first time in this densely populated county which has for so long been designed with only automobile transportation in mind. 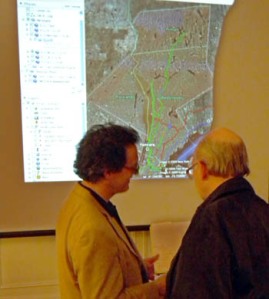 Getting buy-in from the proposed Trailway’s neighbors will be the latest accomplishment of the newly-formed  Westchester Biking and Walking Alliance.  The Alliance was formed this year to coordinate efforts to advocate for improved cycling and pedestrian infrastructure in Westchester County.

It also moves forward one of the Alliance’s most important near-term goals, which include getting bike racks installed on Bee-Line buses, secure bike parking at County Metro-North stations, and 100% completion of the South County, North County, and Westchester Avenue Corridor bike trails.

(Click here for more information or to join the Westchester Biking and Walking Alliance.)

This entry was posted in Cycling. Bookmark the permalink.