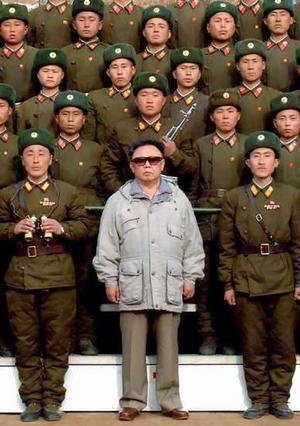 Because we prefer to starve a significant part of our population while we continue to build unnecessary weapons, and maintain a more-than-likely useless traditional military capability, in the continuing delusion of controlling part, or all, of the world by force.

Republicans, especially, would rather build more bombs than extend unemployment insurance. Well, after all, the big money’s to be made in military contracts; those social programs don’t do squat for our loyal Republican entrepreneurs.

Democrats are certainly not without blame, too. But the mad Republican recalcitrance over ratifying new START is beyond the pale.

If Mitch McConnel needs a new windbreaker, I think this style would rather suit him.

This entry was posted in Politics, The American Experience. Bookmark the permalink.

2 responses to “Why is the U.S. Just Like North Korea?”